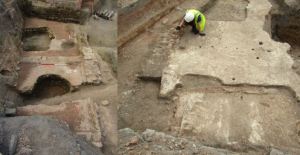 A major redevelopment of north-west Leicester is the Waterside project. In advance of redevelopment a series of archaeological evaluations and excavations are required. ULAS have been working on this project for most of the year.

Work continues apace on two areas of the Waterside development. The team were rewarded on Area A with the uncommon identification of a well-preserved medieval building, fronting onto Northgates (image on right) and the emergence in the corner of a Roman building with a range of four rooms (image left), two of which survive across their entire width, and a robbed out apse at the western end.

The medieval building survived as a plaster floor built over a thin clay ‘slab’, with clay, masonry and mud walls. Possibly reflecting function, the internal space has been sub-divided by a partition of stake-holes, enclosing an area of wear corresponding with a deliberate turn in the masonry wall. This may represent a threshold or doorway within the structure. To the west of the plaster floor room, a north/south clay and post pad partition delineates a room, where actual and impressions of the floorboards survive. The building had a series of hearths through its lifetime and the evidence suggests that the floor underwent successive repair. Extensive sampling was undertaken to ensure as much information was retained as possibly. At roughly 5m across and over 9m long, the building probably represents a timber framed property gable end on to Northgates.

Separated from the medieval archaeology by a strip of buried garden soils of medieval and Roman date are two Roman buildings. Both buildings included solid opus signinum floors, the earlier more substantial with stone footings, masonry external and clay internal walls, the latter dividing two rooms complete in width at the northern end of the building. The western room at c.2.62+ x 4.45m is the wider of the two, the eastern room is c.2.68m across. Both display clues as to their function, with the opus signinum floors deliberately ‘lapping’ up against the internal face of the walls. Despite heavy disturbance from the large railway abutments, the building can be traced to the west where evidence for comparative rooms, albeit floorless, appear to continue, until an apse projects from the western extent.