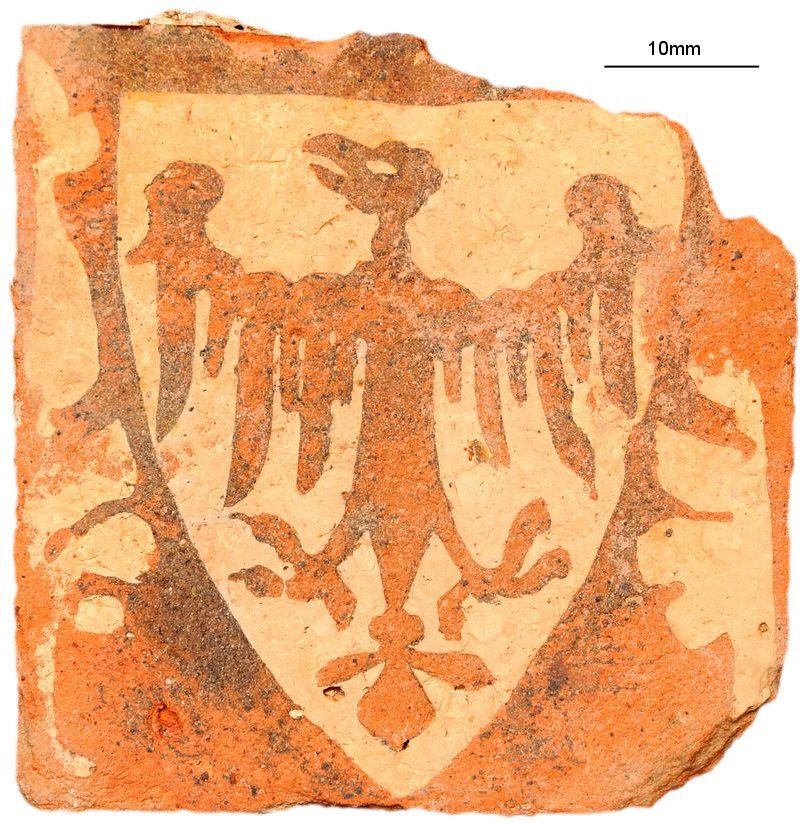 This late 13th century floor tile is one of many found during the excavation of Grey Friars in Leicester in 2012. The tile is of a ‘Stabbed Wessex’ style, commonly found across the English midlands, and it would have originally been laid in the chancel of the friary church, most likely in the choir area.

The design appears to be that of an eagle displayed on a shield. This is the coat-of-arms of Richard of Cornwall (1209-72) or his son Edmund (1249-1300). Richard – the second son of King John – was Count of Poitou in France and the first Earl of Cornwall in England. He was a famous crusader, taking part in the Sixth Crusade (1240-3) and in 1257 he was also elected king of the Romans (king of Germany). His son, Edmund, the second Earl of Cornwall was an important figure at the courts of Henry III and Edward I.

What link did Richard and Edmund have with the Grey Friars at Leicester? Well, Richard was the brother of Eleanor, countess of Leicester, a known patron of the friars; whilst his son, Edmund, leased the town and lordship of Leicester for four years from the Earl of Leicester.

However, whilst it is conceivable that either could have been a benefactor of the friary, the tiles being a deliberate choice for this reason, it is equally possible that neither man had any specific connection. Heraldic floor tiles like this often represented popular chivalric designs of the period and were commonly sold as ready-made sets rather than being custom-made.