Last Thursday, in thick fog I supervised the digger machining open the three trenches that we will be investigating over the next couple of weeks. This is a tense moment. Before you break ground, you have no idea what you’re going to find or how deep it is going to be.  Surprisingly, the archaeology is shallow at Castle Hill, about 30cm below the ground, and very well preserved.

We had our doubts. One of the big questions we have hoped the project will answer is how well preserved is the archaeology? It had been suggested that use of the site in the late 19th and early 20th century for sewage treatment would have caused extensive and irreparable damage to the ancient monument. In any event, our investigations so far suggest that activity associated with this phase of the site’s history is superficial, leaving the underlying archaeology intact. This is fantastic news as it now appears that the monument is much better preserved than previously thought.

By the end of Thursday it was apparent that all three trenches contained archaeology and that there would be lots of work for our volunteers who arrived on site on Monday.

Monday was a dreary wet day, never an auspicious start to a project, especially if you’re digging on clay! Clay is in abundance in Leicestershire, boulder clay deposited during the last glaciation. Slippery and slimy when wet, rock hard when dry, it is lovely to excavate for a day or two but its appeal rapidly diminishes the wetter or drier it gets. This is the natural ground at Castle Hill but the wet start did not dampen the enthusiasm of our volunteers and the week has rapidly turned for the better.

Efforts this week have focused on two of our three trenches, Trench 1 (dug across the outer bank and ditch of the earthwork) and Trench 3 (dug across an area of ‘rubble’ visible in the geophyiscal survey data in the northern half of the site). First order of the day has been to clear off all the loose soil and clean up the archaeology so that it can be photographed and planned. We have an abundance of features and deposits in the trenches and it is important to characterise what we have before digging deeper. 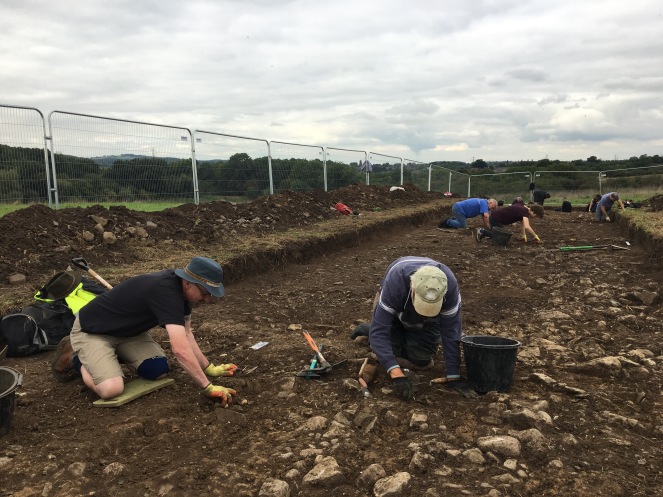 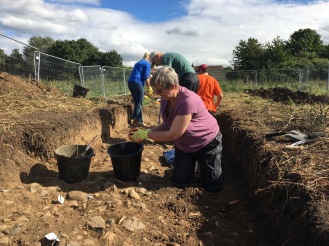 A final clearn-up of the trenches so photos can be taken. 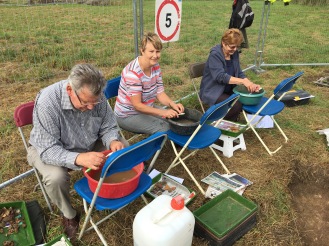 Pot washing, we have bags of finds from Trench 3! 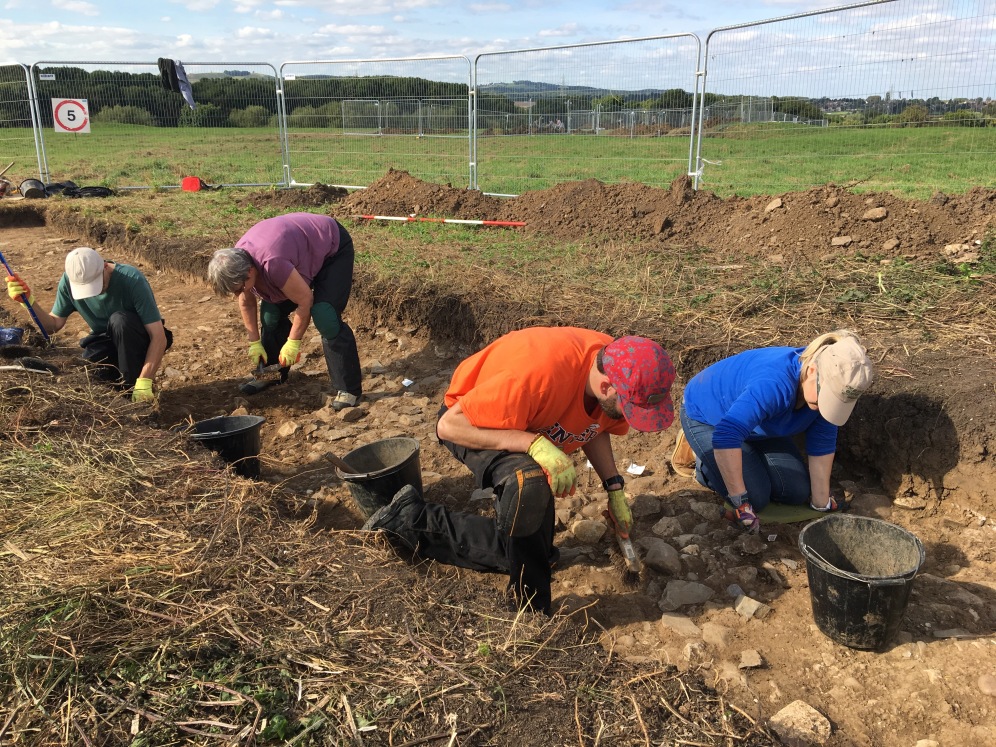 In Trench 1, we have found evidence of a substantial earth and stone bank. The earth is presumably upcast from the ditch surrounding the earthwork and the stones are worn and may have been collected from surrounding fields. Outside the enclosure there is little evidence of activity but inside is the remains of a gravelled surface. So far dating the bank is remaining elusive. A few sherds of medieval pottery have been found in the overlying soil but until we dig a slot into the bank itself we won’t have any dating for the earthwork (this is next weeks task – to dig a slot across the ditch and into the bank).

Whilst finds are lacking in Trench 1 at the moment, the opposite is true in Trench 3. The ‘rubble’ layer seen in the geophys has proved to be an extensive layer of broken roof slates (all local Swithland slate) of a type that has probably come from an important medieval building. A large quantity of green glazed medieval pottery has also been found as well as fragments of glazed ridge-tiles, including a fragment of glazed loop-handled decoration (see image). Cursory inspection of the pottery suggests it is predominately 13th and 14th century in date, which fits with the period the Knights Hospitallers held Beaumont (read our first blog).

Beneath the broken slate, our team of volunteers have uncovered the remains of rough stone rubble ‘yard’ surfaces surrouding areas of earth ‘flooring’ which might be evidence of buildings. A large amount of iron slag has been recovered, suggesting metal working is taking place on the site. Whilst the quality of the pottery and ridge tiles indicates that some of the activity / buildings on the site was of high status.

Just five days into the projects and we already have fantastic new information on the site. We have our first tantalising evidence for buildings, we have clear evidence that the site was occupied in the medieval period and we are finding little evidence of activity on the site before or after the 13th/14th century.

Next week we will look closer at the archaeology in Trenches 1 & 3, and we’ll start looking at Trench 2 as well (look out for Blog 3). In the meantime come and find out more for yourself…

Come along and visit us on Saturday 24 September and find out what we have found so far, see some of the latest discoveries, talk to the archaeologists and have a tour of Castle Hill (tours at 12 and 2pm).