The 2,300-year-old bark shield is the only one of its kind ever found in Europe

A unique bark shield from the Iron Age has been discovered by archaeologists from the University of Leicester, the only one of its kind ever found in Europe.

The shield, which measured 670 x 370mm in the ground, was found south of Leicester on the Everards Meadows site in 2015, as part of routine investigations on the site by University of Leicester Archaeological Services (ULAS) archaeologists on behalf of local family business Everards of Leicestershire.

The shield has been carefully constructed with wooden laths to stiffen the structure, a wooden edging rim, and a beautiful woven boss to protect the wooden handle. The outside of the shield has been painted and scored in red chequerboard decoration. Radiocarbon dating has revealed that the shield was made in the Middle Iron Age, between 395 and 255 BC.

The shield was severely damaged before being deposited in what is believed to be a livestock watering hole, with some of the damage likely to have been caused by the pointed tips of spears. Further analysis is planned to help understand if this occurred in battle or as an act of ritual destruction.

The Enderby Shield by Archaeological Services (ULAS) on Sketchfab

The Iron Age evidence from the site consists of land boundaries, an area of trackway and the deep pit in which the artefact was found. The site sits within a farming landscape known to have been used and managed by Iron Age and Roman communities, with the Fosse Way Roman road running close by.

Although prior evidence has shown that prehistoric people used bark to make bowls and boxes, this is the first time researchers have seen the material used for a weapon of war.

An experiment to remake bark shields in the spring of 2018 just to the north of Leicester showed that similar shields could be quickly made using products sourced from mixed woodland with a simple tool kit. The shape of the finished items is fascinating, with differential shrinkage of the wood components causing the shields to curve as they dried.

Further information on the shield  and the experimental work can be found here: https://www2.le.ac.uk/services/ulas/discoveries/projects/iron-age/enderby-shield

Initial thoughts that a bark shield would be too fragile for use in battle were turned on their head by initial experimental work which showed that the shield could stand up to heavy impacts from blades and arrows. A bark shield, although not as strong as a solid wood or metal shield, is much lighter, allowing for speed and movement.

The project analysis was managed by Matthew Beamish, Project Manager for ULAS, with the analysis of the shield managed by Mike Bamforth, Project Manager in the Department of Archaeology at the University of York. Many cutting-edge analytical techniques have been used to understand the construction of the object, including CT scanning and 3D printing at the Leicester Royal Infirmary.

On the discovery, Matthew Beamish said: “We have learned a great deal about a lost technology from fragile evidence which could have been so easily overlooked, and the project has been a wonderful collaboration providing a rarely seen glimpse of our prehistoric past. Every now and again, archaeological sites produce organic artefacts that remind us of the richness of the past, and this is one of those sites. I have been thrilled to play my part in managing the overall analysis, co-ordinating the bark shield experimentation and reporting the Everards Meadows site – this has been a highpoint in my archaeological career.”

Mike Bamforth said: “This truly astonishing and unparalleled artefact has given us an insight into prehistoric technology that we could never have guessed at. Being part of the team working to tease apart the complex secrets of the shields construction has been incredibly interesting and rewarding.”

Dr Rachel Crellin, Lecturer in later Prehistory at the University of Leicester, who assessed the evidence for impact damage, said: “The first time I saw the shield I was absolutely awed by it: the complex structure, the careful decorations, and the beautiful boss! I must admit I was initially sceptical about whether the shield would have functioned effectively, however the experimental work showed that the shield would have worked very effectively and my analysis of the surface of the object has identified evidence of use! It is a truly unique object – but – was probably common place in the period!”

Julia Farley, British Museum, said “This is an absolutely phenomenal object, one of the most marvelous, internationally important finds that I’ve encountered in my career. So often it is gold which grabs the headlines, but this bark shield is much rarer. Bark and basketry objects were probably commonplace in ancient Britain, but they seldom survive, so to be able to study this shield is a great privilege. It holds a rich store of information about Iron Age society and craft practices. We are grateful to Everards and the University of Leicester for donating such a significant object to the British Museum where it will go on display next year after further investigation and preparation. ”

The shield has now been conserved by York Archaeological Trust and will be deposited with the British Museum by the University of Leicester in agreement with Leicestershire County Council on behalf of Everards of Leicestershire, who funded and supported the project. 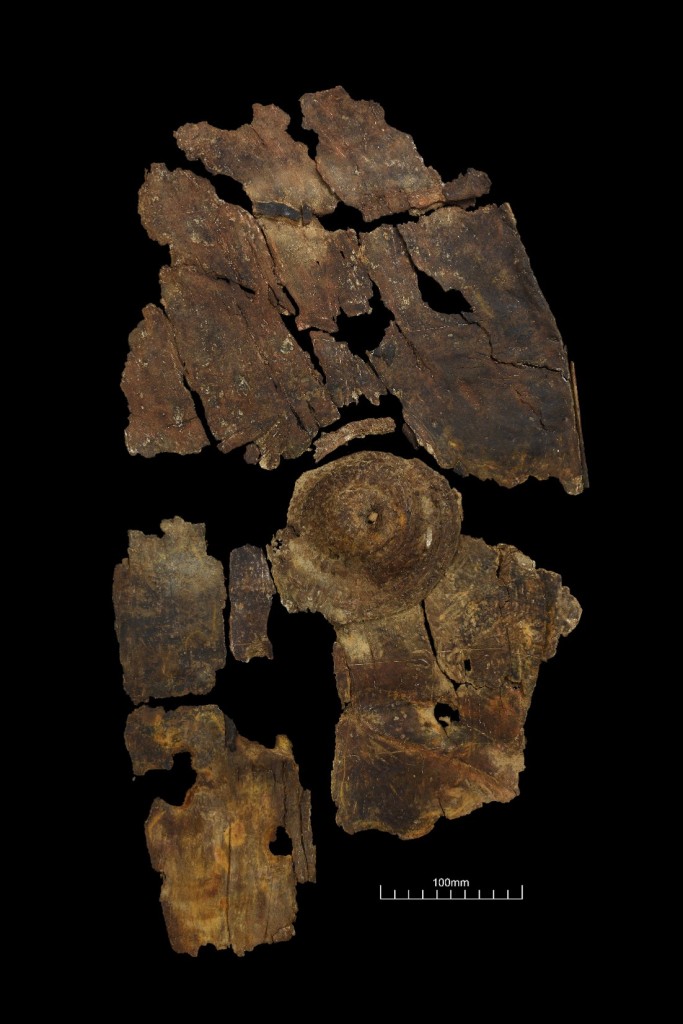