Festival of Leicestershire and Rutland Archaeology 2019 programme of events announced! 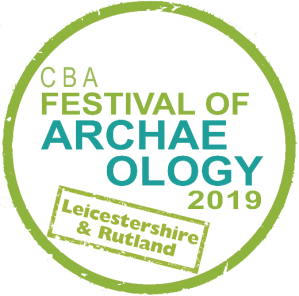 The programme for the 2019 Festival of Leicestershire and Rutland Archaeology – the biggest Festival of its kind in Britain- has been announced. Throughout the four weeks of July more than 90 events will be held across the two counties celebrating their rich and fascinating heritage.

This year’s Festival is bigger and better than ever and the University of Leicester is proud to again take part, this year organising or providing support for 17 events. A host of expert speakers from the University will talk on a diverse range of archaeological subjects, from the discovery of Richard III, to the history of Leicester and Oakham Castles, the Hallaton Iron Age Coin Hoard, the Iron Age hillfort at Burrough Hill and the Swithland slate industry. There is also a chance to visit the University’s excavations at Bradgate Park and take a tour of the ULAS finds labs to find out what goes on behind the scenes.

The Festival has something for everyone, with family friendly activities at museums, guided walks of our counties’ historic sites, talks by experts, displays and exhibitions, and chances to get your hands dirty with a bit of excavation.

Whether it’s a visit to the University’s excavations at Bradgate Park to find out more about the childhood home of Lady Jane Grey, or a tour of the Glenfield Tunnel, one of the earliest steam railway tunnels in the world, or a chance to build your own Roman Leicester in Minecraft, there are all sorts of fantastic and unique opportunities to explore thousands of years of secrets hidden beneath your feet.

This year the Festival in Leicestershire and Rutland runs for four weeks from Saturday 29th June to Sunday 28th July, and includes the Council for British Archaeology’s nationwide Festival of Archaeology (13th – 28th July).

Festival convenor, Peter Liddle, commented ‘Every year our Festival gives people across the two counties a chance to visit sites with expert guides and hear from experts in local heritage thanks to a unique alliance of groups and individuals who work so hard to make it happen’

Festival leaflets are now widely available from local museums, libraries or tourist information centres (and hotels and other tourist venues across Leicestershire and Rutland) and an up to date downloadable programme can be found on line at www.leicsfieldworkers.co.uk/festival-of-archaeology

This year’s Festival kicks off with a Launch Event at the Bradgate Park Excavation Open Day on Saturday 29th June, 11am – 4pm. This great event is a chance to find out more about what’s on during the Festival. Visit the University of Leicester excavations at Bradgate House and take a guided tour of the dig to find out what has been discovered this year. Or take part in one of the many other activities for all the family, including demonstrations, archaeological material to handle, re-enactors, exhibitors and bookstall.

To find out more about what is going on elsewhere during the nationwide Festival, visit https://festival.archaeologyuk.org/

For more information on the University of Leicester’s events please contact Mathew Morris on mlm9@le.ac.uk

Visit the University of Leicester excavations at Bradgate House. Guided tours of the excavations and Bradgate House will go on throughout the day along with many other activities for all the family, including demonstrations, archaeological material to handle, re-enactors, exhibitors and bookstall.

THE ARCHAEOLOGY OF LEICESTER CASTLE

“Leicester has a castle?” is often a visitor’s surprised response. Today it might not be a fairy-tale castle of tall walls, turrets and gates but it is a hidden gem in the city’s history, visited by colourful characters, including Richard III. University of Leicester archaeologist Mathew Morris will talk about the castle’s history and archaeology, including new discoveries made during the recent refurbishment of the 12th-century Great Hall.

RICHARD III: The KING UNDER THE CAR PARK

Join Hinckley Archaeological Society to hear University of Leicester archaeologist Mathew Morris talk about the incredible discovery and identification of King Richard III, whose remains were found beneath a Leicester city centre car park in 2012. He will update us on the fascinating information that has been derived from further analysis and tests on Richard’s remains since 2012.

GREYFRIARS, LEICESTER AND THE SEARCH FOR RICHARD III

Join Dr Richard Buckley, the lead archaeologist on the University of Leicester project which found Richard III in 2012 and confirmed his identity beyond reasonable doubt after an extensive programme of scientific analysis, generating press interest from around the globe.

Have you ever wondered what happens to the artefacts found on excavations once the digging has finished? Take a behind-the-scenes tour of the ULAS finds and environmental laboratories at the University of Leicester and find out more.

Join Dr Richard Buckley for a walk around the remains of Leicester Abbey, Leicestershire’s largest and richest medieval religious house and hear about the excavations that have helped to tell its story

Join us for our regular creative family day, this time with a Roman theme! Learn about Roman crafts, hunt for buried artefacts, rebuild Roman Leicester in Minecraft, and more! In partnership with the University of Leicester.

FINDINGS OF THE DIG AT OAKHAM CASTLE

Dig director Mathew Morris from the University of Leicester will give a talk on the recent community archaeological dig at Oakham Castle. The team re-opened trenches started by Time Team in 2012 and have expanded our knowledge of the site and discovered new structures previously unknown.

GREYFRIARS, LEICESTER AND THE SEARCH FOR RICHARD III

Join Dr Richard Buckley, the lead archaeologist on the University of Leicester project which found Richard III in 2012 and confirmed his identity beyond reasonable doubt after an extensive programme of scientific analysis.

Tickets£3 including light refreshments. No booking necessary. Enquiries 07435 564236 or www.sthelensheritage.co.uk

A talk by John Thomas, Project Manager, University of Leicester Archaeological Services, about the University excavations at Burrough Hill, alongside an opportunity to see some of the finds in the museum.  No booking necessary.

RICHARD III: THE KING UNDER THE CAR PARK

Mathew Morris, one of the lead archaeologists on the Grey Friars Project, will reveal the story of the incredible discovery and identification of King Richard III, whose remains were found beneath a Leicester city centre car park in 2012.

Join Dr Richard Buckley for a tour of Leicester Castle with a chance to see the newly restored Great Hall. The Castle is one of Leicester’s hidden gems and was the home of the Earls of Leicester and a favourite of Dukes of Lancaster including John of Gaunt.

The Swithland Slate headstones found in many of Leicestershire’s churchyards tell us much about the people and cultures that created them. Colin Hyde’s talk will explore some fascinating examples where urns, skulls, and snakes abound, and Death himself stalks the slate. Organised by the Leicestershire Archaeological and Historical Society.

Vicki Score, University of Leicester Archaeological Services, will describe the excavation of the Hallaton Iron Age shrine with its votive hoards.

Tickets £3 including teas or coffees. No booking required.